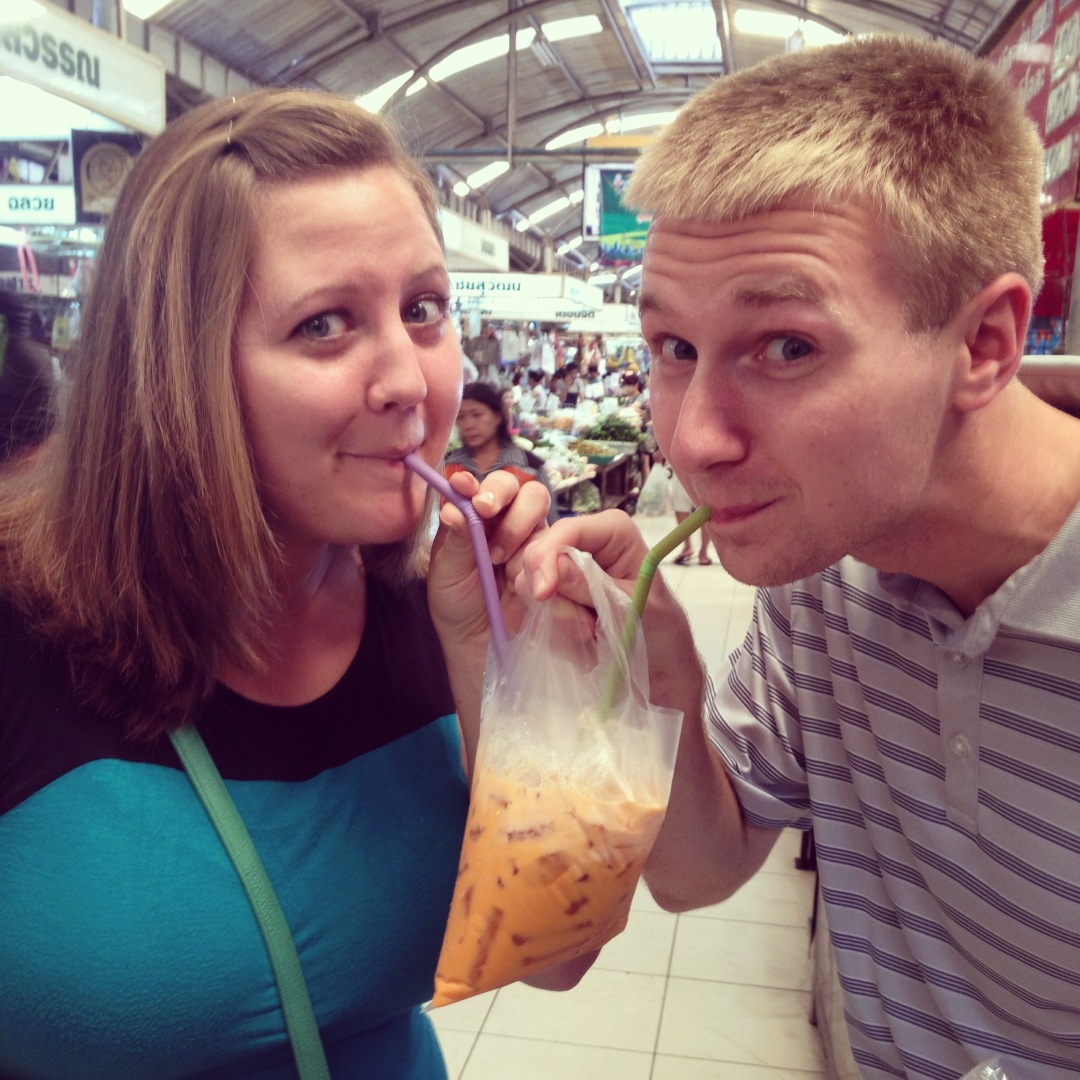 Monday was literally spent eating and spending time with people. It’s not what you would typically expect to see on a mission trip itinerary, but I suppose this hasn’t been a typical mission trip.

After our morning worship and prayer session, we drove to a Thai market where John, Kathy, and Bee each took a few of us around to see and try different vendors. Bee had the Chinese donut crew: Mitch, Sophie, and me. She was eager to show us all these delicious fruits and treats she wanted us to try. We ended up buying some freshly fried bananas, jackfruit, some kind of pastry, and authentic Thai iced tea served in a plastic bag filled with ice. Some of the other groups passed through the live fish section, much to their dismay. I think my group was disappointed we had missed it! John’s group bought durian, a fruit notorious for its sweaty gym sock-like odor.

We took our market purchases to Bee’s house, where we met her brother (Grace’s father), her sister, and her nephew (her sister’s son). Bee’s sister prepared a delicious lunch for us with three different kinds of rice (white, fried, sticky), two kinds of chicken (fried, spicy), vegetables, and curry. This meal was so good it demanded seconds. The durian, however, was more of a “once and done” type of food. Josiah and I helped ourselves to at least three servings of durian, though. Adventurous eaters FTW. In addition to lunch, we spent time in fellowship with the family, not all of whom are Christians. Mitch shared his testimony with Bee’s nephew to help him practice his English language comprehension. [Lesson of the day: American English words like “kinda” are difficult for English language learners to understand. Right, Mitch?] The women got a tour of Grace’s bedroom and took some time to pray over her room and for the time she spends there. We prayed that it would be a place of rest and peace and a place where she would encounter the presence of God. We sang a worship song for the family, which they may have viewed as a performance but we saw as welcoming the Holy Spirit into the home. We also prayed over Bee’s brother, who was left partially paralyzed after his stroke. He had been almost completely paralyzed on his right side but has been gradually getting better after receiving prayer for healing last year. He is currently able to stand and walk with a cane but remains unable to speak. We prayed for his ability to communicate to be restored, for the damage to his brain to be reversed, and for complete healing. While we did not see miraculous and instantaneous recovery, he was encouraged and deeply moved by our prayers. He seemed to feel something happening within his body, but without the ability to communicate, we are not sure exactly what he was experiencing. I look forward to hearing updates from Bee about any improvements to her brother’s health.

After Bee’s house, we went to John and Kathy’s old neighborhood to visit their friend Book. She served us brownies, cookies, chips, and tuna fish sandwiches. This was a welcomed selection of foods for those whose stomachs have not been entirely compatible with Thai cuisine. She said she would have served a better meal if she had time to prepare, but we assured her it was perfect. Book spent our time together telling us about how she became a Christian and the struggles she faces as a Christian in a Buddhist family/culture. She is seeking to find a balance between standing firm in her faith while respecting her family and friends’ Buddhist traditions. For example, what’s the best way to honor a friend’s loved one at a funeral without participating in rituals that go against your Christian beliefs? She was encouraged by the fellowship with other Christians, our prayers for her, and our time of worship within her home.

Our last stop was Auntie Pim’s house. She is a Buddhist friend of John and Kathy, and like our other hosts from throughout the day, she was very gracious and hospitable. While we did not get a chance to sing in Pim’s home or offer a prayer of blessing over her, it was a sweet time of getting to know each other. She took us down the street to a restaurant owned by her family. Food was constantly being brought to the table, and it was all incredibly delicious. After a while, though, many of us were beyond full and slipping into food comas.

At times, I think it was easy to think we weren’t doing ministry when we were just sitting around eating and talking, but based on the encouragement our friends said they received from spending this time together, God was clearly still at work in those moments. The key thing for us to remember is to remain engaged in the moment and the opportunities God may be opening up before us even when it seems like we aren’t doing much.

One thought on “Day 5: Food and Fellowship Marathon”