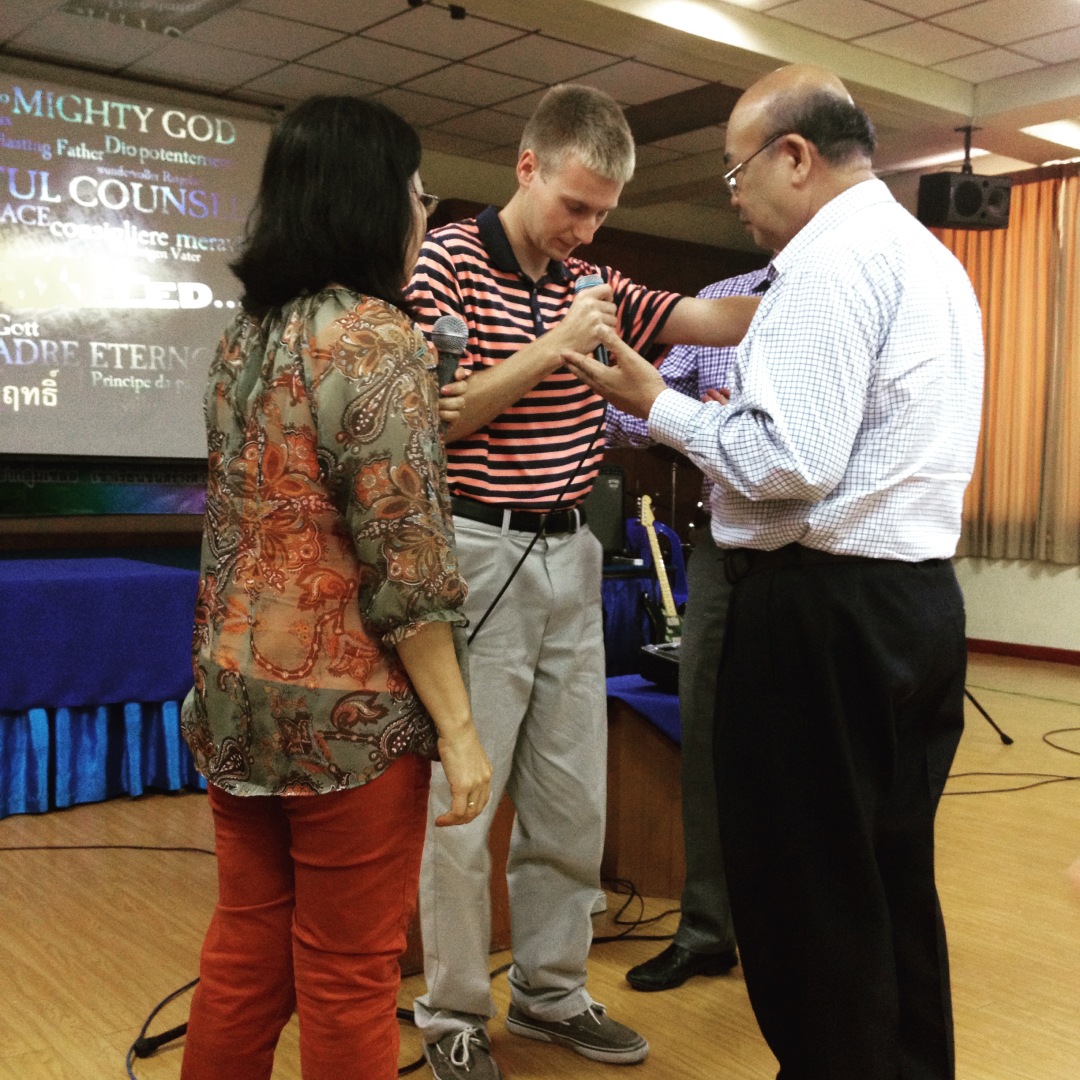 Sunday morning began a little earlier for John, Mitch, Sophie, and me. The four of us left the guest house at 6:30 am to go to the market for fresh Chinese donuts. We rode a tuk-tuk (motorcycle rickshaw) to the market, where we saw tons of vendors preparing for the day. A pickup truck filled with full butchered pigs. Endless rows of fruits and vegetables. Large pots of curry, soup, and other meals. Live fish, turtles, and snails. Durian. We also saw Buddhist monks standing throughout the market collecting food offerings that people give to them (an act to earn some good karma). It was a successful excursion, and the donuts were delicious!

After breakfast, we gathered for worship and asked God what he wanted for us that day. Lindsey heard the name Darlene. Josiah saw a salt shaker. Ian saw a time lapse of the Bangkok cityscape and a tree. Mitch saw a man sitting in the church: second row, glasses, balding on top with hair on the sides. We left the guest house for a church service at the YWCA, and soon after we sat down, I saw two rows behind us in the third row a man: glasses, balding on top with hair on the sides. Mitch prayed for verification that this was the man from his vision, and all he heard was “Yes, yes, yes!” After a wonderful time of worship in both English and Thai and a message that John preached (in Thai!), Mitch went up to the front to share about his vision. The man joined him at the front, and through a translator, Mitch prayed over him. Lindsey and Ian then began to lead another time of worship as the rest of our team began to spread out and pray for people in the congregation. I prayed some quick prayers for some young women in the back, but then an older woman a few rows ahead turned around and made eye contact with me. As soon as I began praying for her, I began to cry, unexplainably overcome by emotion for her. She, too, began crying. I had no translator, so I did not know what she was experiencing. It was clear, though, that God was doing something, so I continued praying. I noticed that her right hand was resting on her abdomen, so I laid my hand on hers and began praying for healing. I didn’t know what needed to be healed, but as I prayed for a wholeness of body, her hand began to shake and she continued to cry. The pastor came over and explained that she had been experiencing pain from a recent kidney stone operation. Through him, I learned that she had pain when she got to church, but after I began praying for her, the pain was gone. This was a completely new experience for me. Healing was something God did through other people. Not me. And yet here I was in a YWCA in Bangkok praying over a woman who did not understand what I was saying and seeing God heal her from pain. God was powerfully at work. He used Mitch to heal a woman from a rash that disappeared before their very eyes. He used Lindsey and Kathy to bring a woman to accept Jesus as her savior.

After a home-cooked lunch at the church, we drove two hours to Pattaya, a city known for its red light district. It was not in our original itinerary to go here, but John and Kathy felt God directing them to change plans. We attended another worship service where Living Streams was playing the music and Leif Hetland was speaking. Originally we thought the service was part of an event called Pattaya Praise, but we learned that the event had ended the day before. Half of the team (Sean, Sophie, Ian, and Ashley) left to prayer walk around the city, and the other half (John, Kathy, Mitch, Lindsey, Josiah, and I) stayed at the service. During worship, we sang “God of this City,” which we learned was written IN Pattaya in response to the darkness and hopelessness that the writers saw there. Together in singing, we declared that greater things are still to be done in this city, and that God would redeem it to himself, transforming it from a sin city to a son city. Leif presented a different message that night about God as our good father – this first face seen, the first voice heard, the first love felt by Adam and Eve. He talked about how God as our good father took our shame upon himself so that we may be righteous just as the father did for the prodigal son in Jesus’ parable. He also talked about seeing ourselves as God sees us – as his treasure, his beautiful child.

Leif’s message reminded me of various people we had prayed for earlier that day. At the YWCA, I prayed for a woman who said she struggled with accepting God’s love and seeing herself through God’s eyes. I thought of Grace, Bee’s adopted daughter, whose father is partially paralyzed from a stroke and cannot communicate with her. During Saturday’s service, Grace began crying during the song “Good, Good Father” and clung to John’s side. She likely craves a more typical father-daughter relationship, but it is our hope that despite earthly circumstances, she would come to know God as her Heavenly Father.

At the end of the message everyone gathered at the front, where we prayed together and Leif prayed over people throughout the crowd. All around, people were being slain by the Holy Spirit, compelled by the power of God to fall to the ground. As Leif got closer to where our group was standing, I admit I got a little nervous. I’m somewhat of a skeptic. This is something I see televangelists do, not something that happens to me. I stepped back, allowing the others in my group to go before me, volunteering to stand behind them and catch them when the fall. But then I found myself face to face with Leif. He asked, “May I move your hair?” and then brushed my bangs to the side. He gave the “I’m watching you” gesture, but more gently as if to say “I see you.” And then he just softly brushed my left cheek with the back of his hand. I felt my weight shift into my heels and allowed myself to fall back into the arms of someone who then lowered me to the ground. As I lay on the ground enjoying the presence of God, I felt someone vigorously rubbing my left knee. I wanted to open my eyes to see who it was, but at the same time did not want to interrupt my experience so quickly or make whoever was doing it feel uncomfortable by watching them. But as I rejoined my group and shared my experience, they said that no one was there. They did not rub my knee nor did they see anyone standing over me. I’m still trying to wrap my head around this. Like healing, this was something that happens to other people. One by one, members of our team went down to the floor, overcome by the presence of the Lord.

When we left the service, we drove by Walking Street, the red-light district. Wikipedia refers to it as a “tourist attraction.” Bars, strip clubs, and prostitutes as far as the eye can see. Massage parlors with waiting rooms full of men. Unspeakable and horrific acts hidden behind closed doors, waiting for the men who are looking for such opportunities. A very dark place despite the bright neon lights. Greater things are still to be done here.