Snow White and the Seven Dwarfs

I’ve been pretty hooked on ABC’s Once Upon a Time, a Sunday night drama that takes a fresh look at the fairy tales we all know. Well, the fairy tales almost everyone knows. As I’ve been watching this show, I’m realizing that I am rather unfamiliar with these classic stories. 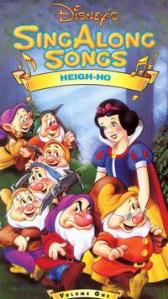 When I was a kid, I watched my Disney Sing Along Songs VHS tapes over and over again (much to the delight of my siblings and parents, I’m sure…). We owned “Heigh-Ho,” “The Bare Necessities,” “Under the Sea,” and “Disneyland Fun” – four volumes of the Sing Along Songs series. We didn’t own, however, any of the actual Disney movies (except for a bootleg copy of Cinderella). So while I knew many Disney songs word for word, I had never seen the actual movie. (It’s safe to say I haven’t seen most Disney films that were released prior to 1987.)

Such was the case with Snow White and the Seven Dwarfs. I could sing for you “Whistle While You Work” or even “The Dwarf’s Yodel Song,” but I couldn’t tell you anything about the story. I knew there was a girl named Snow White. I knew there were seven dwarfs. And I was pretty sure there was a prince and a kiss, too. But I couldn’t tell you how the Huntsman and Evil Queen came into the picture or how Snow White ended up living with “seven little men,” as she puts it.

Now that I’ve seen the actual movie and have a better understanding of the story, Once Upon a Time is a little less confusing. That doesn’t mean the movie didn’t leave me with a few questions…

1. What the heck is a “scullery maid”?
2. Couldn’t the woodland creatures have led Snow White to an UNoccupied cottage?
3. Why is Snow White ordering the dwarfs around and telling them how to run their home when she’s an uninvited guest? (It reeks of Western colonialism.) And why do the dwarfs just do everything she says? Is it because she’s pretty or because she’s a princess?
4. Who leaves the windows open when there’s a blood-thirsty evil queen out there?!
5. Don’t tell me the dwarfs weren’t just the least bit jealous that some prince just swooped in and stole their pretty roommate!

FYI: I’m pretty sure the only pre-1987 Disney animated features I have seen (in their entirety) are Bambi, Cinderella, and Alice in Wonderland. Bambi and Cinderella are on the same bootleg VHS tape, and I watched Alice in Wonderland in 8th grade health class during the unit on drugs. Just say no, kids.