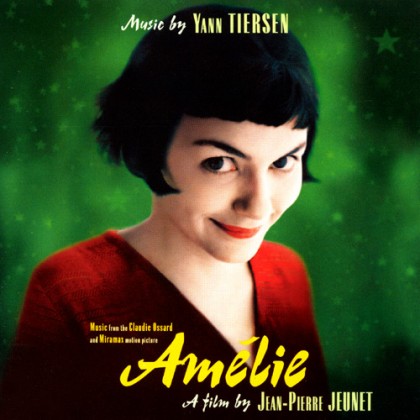 For some reason, I waited 11 years since its theatrical release to watch Amelie. (It probably had something to do with the fact that 13 year olds aren’t supposed to watch R-rated movies in the theater.) That was 11 years too long. As soon as I started watching it, I knew it would quickly become a favorite. It’s one of those movies that keeps you smiling and chuckling. There were so many things to like about it.

1. I like the way the narrator introduces characters. Can you imagine if someone introduced you by announcing a few of your likes and dislikes? It sounds peculiar yet fascinating and intriguing. From the very beginning, you would know a few fine details that made that person a unique individual. It could also spare you the uncomfortable social awkwardness of say… hugging someone who doesn’t like physical contact. This is Cindy. She likes rubbing fuzzy fabric between her fingers, putting a dash of salt on slices of Granny Smith apples, and when musicians include song lyrics in their liner notes. She dislikes when people don’t put away shopping carts at the grocery store and the smell of worms after a rain storm.

2. I like that the story is partly a mystery. I really enjoy mysteries and watch crime-solving TV shows (too much for my own good). Amelie is different. She’s not trying to find a murderer or catch a thief, but she is trying to unravel a mystery. It’s not so much a mystery as it is a game that leads to the discovery of truth. Amelie’s mysteries are not unlike that of Todd Bieber, “the boy Amelie” – a New Yorker who found a roll of film in Brooklyn’s Prospect Park and sought out to find its owner.

3. I like that Amelie is pretty much a stalker… just like me. In her quest for answers, Amelie learns so much about strangers she may never meet. She can find out where they work and where they live, but unlike Amelie, I have the Internet – and Facebook – to help me with my search. I don’t need to physically talk to anyone and ask them where to find Dominique Bretodeau – or is it Bredoteau? (Although in-person investigation gives you an excuse to lurk behind telephone booths…) A couple Google searches later, I’m looking at the Facebook profiles of three girls I met in line for SNL stand-by tickets. (That really happened. They were from Nebraska.) A few months ago, I tracked down a girl I met in 2003 on a mission trip to Ecuador, and she said, “I don’t know how you found me!” Imagine if Amelie and I teamed up… We’d be unstoppable.

4. I like looking at it. Amelie is such a visually beautiful film. Great colors, fantastic images. I quickly learned that Amelie is not for the multitasker. Because the film is in French, you have to watch to read the subtitles. It’s not a movie you can just listen to without looking, but even if there weren’t English subtitles, I’d still be glued to the screen. It’s like a coffee table book of beautiful photos without pages to turn.

5. I like Yann Tiersen. Well, I do now. I didn’t really know who he was before the movie. He composed the soundtrack, which I’m listening to now, and it makes me want to ride a bike through Paris or watch home movies on scratched-up 8mm film or take up the accordion.

So congratulations, Amelie. You’ve made it into my Top 5 favorite movies.