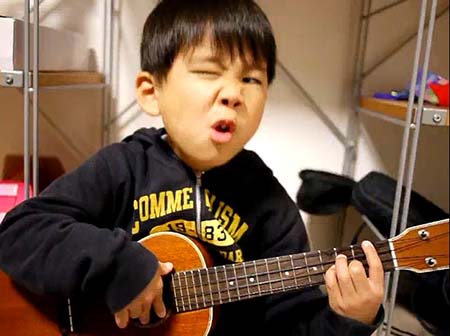 Wishlist Update: #12 and #13 – Everybody Plays the Ukulele

From the wishlist
#12: Everybody by Ingrid Michaelson – she’s amazing as a live performer, but I suppose a CD will do. She’s one of several people who make me think it would be awesome to have an ukulele
#13: Ukulele

My birthday was in June, but I haven’t taken the opportunity to write about updates to the wishlist (mostly because, for some reason, it takes a lot of time to fix the formatting on the actual wishlist every time I make changes). Shortly after my birthday, I received a package from Amazon.com, and inside were three things. 1 – a DVD of the BBC miniseries “North and South.” My sister added the note, “Ok… this isn’t really for you. I ordered it for me, but you can watch it :) and if you like it… you can have it. :)” I watched the beginning of it when I was with my sister, and I think I’ll let her keep it.

2 – Everybody by Ingrid Michaelson! It’s currently one of the CDs in my car, and it makes for a great drive. What’s not to love about Ingrid? Her voice and personality make me think she should hang out in my living room and play music when we’re not talking or cracking jokes. I don’t think I can pick out a favorite track from the album, but there are a few songs that I like to repeat when I am listening to the CD. The title track and “Maybe” are probably the two tracks I listen to most, but I also really enjoy “Once Was Love.” What’s interesting about Ingrid’s style is contrast between the lyrics and musical style. In spite of lyrics like “everyone is hurting now” and other songs about no longer being in love, the album is pretty upbeat with a quirky, melodic happiness to it. If you plan to get this CD, make sure to get a physical copy so you can see the album art. 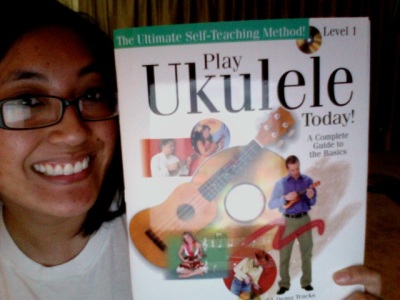 3 – Play Ukulele Today: A Complete Guide to the Basics with the note, “July 1, you’ll receive the other half of this.” When my sister returned to the States after living in the Philippines, she came home with a ukulele for me! She made sure it was made in the Philippines so it could be special. She also gave me some “Pinoy Ako” stickers to put on the back of the uke. I’ve been enjoying learning how to play. I haven’t really used the instructional CD that came with the guide book. I mostly pick out a song I want to play and learn the necessary chords. The first song I learned was Ingrid Michaelson’s “You and I,” suggested by my friend and fellow ukulele player Hannah Faye. I also learned how to play this song:

I think the next time Hannah Faye and I are together, we are going to try playing both Ingrid’s song and “Count on Me” by Bruno Mars and record it for YouTube :)